A year ago, I wrote about the ‘mancave’ phenomenon.

My opinions on the matter are still mixed as they were then – I like the idea of married men having a space or spaces within their home in which they can feel comfortable, and spend time apart from their wives, places possibly with a bit more masculine décor; but, I don’t like the idea that the rest of the house is ‘hers’, to decorate entirely according to her tastes, etc., and that he is only ‘allowed’ such a space on the sufferance of ‘the Boss’, all too common amongst Blue Pill men; a place he feels a need to ‘retreat’ to, rather than merely relaxing in.

But, all that aside, if you’re gonna have a ‘mancave’, or whatever else you want to call such a space, for whatever reasons, I think it’s reasonable to expect that it should be entirely yours, and have nothing to do with your wife, her tastes, her comfort level (since it’s not for her), etc.

Well, today, I read an article in a free daily local ‘zine by a married female columnist that gets it all wrong. There is no permanent link to the story, as the paper’s website doesn’t store articles by text, only displaying pages of each day’s paper as images. But here is a capture of the page with the article in question: 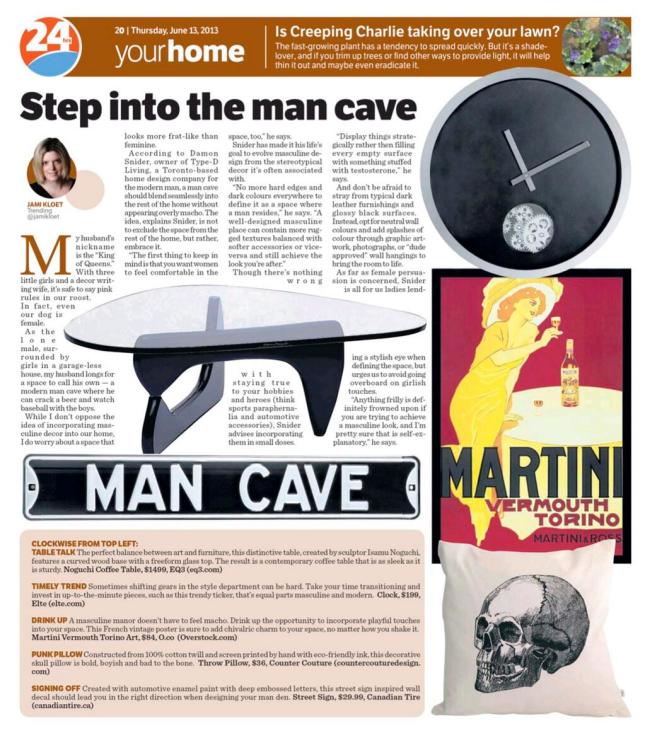 Doing it all wrong.

Mrs. Kloet claims to see the value in such a space, but:

I do worry about a space that looks more frat-like than feminine.

Uh, the whole point is that such a space would be HIS, not YOURS, so why should he or we give a shit what you think?

Enter some douchebag ‘design consultant’ guy, who markets himself towards men who don’t want their spaces to be ‘too masculine’, apparently:

According to Damon Snider, owner of D-Type Living, a Toronto-based home design company for the modern man, a man cave should blend seamlessly into the rest of the home without appearing overly macho.

Uh, why? If it’s his space, not hers, why shouldn’t it be more ‘macho’ if he wants that?

And he goes on to argue that:

“The first thing to keep in mind is that you want women to feel comfortable in the space, too,” he says.

No you don’t! They’re not going to be in there, if it’s truly a man cave; if they never go in, what cause would they ever have to feel uncomfortable, anyway? Sheesh!

As one can see, the article goes on to explain how Snider has made it his mission to convert men away from “hard edges and dark colours everywhere” towards a more ‘balanced’ look.

For instance, regarding traditionally-favoured masculine décor such as sports paraphernalia and automotive stuff:

“Display things strategically rather than filling every empty surface with something stuffed with testosterone,” he says.

Ah, yes; heaven forbid that men should decorate their spaces like men!

And don’t be afraid to stray from typical dark leather furnishings and glossy black surfaces. Instead, opt for neutral wall colours and add splashes of colour through graphic artworks, photographs, or “dude-approved” wall hangings to bring the room to life.

Hey, I have an idea; why not let men decide for themselves what they each might want for their ‘den’ or ‘man cave’; some will opt for vintage 19th-century European alcoholic beverage posters, and some will opt for mounted deer heads (of ones they hunted successfully), or sports hero posters; men have varied interests, so one should expect that would be reflected. Why should any one particular look be deemed better than others? De gustibus non est disputandum, as the old maxim goes.

But of course, he goes on to encourage the ‘ladies’ (as Mrs. Kloet says) to ‘lend a stylish eye’ while not ‘going overboard on girlish touches’. As if they have any business giving any such advice to their husbands for such a space – unless he of course asks for it (though I can’t imagine why any man would want to).

So, there it is. Not even the ‘man cave’ is allowed to be free of female or metrosexual design consultant influence, according to Canadian progressive SWPL dogma.